Coleman Steel belted cooler is the descendent of a prominent manufacturer and that places expectations quite high already. Indeed, this cooler was designed and developed by a leading brand in the industry and that puts the Steel Belted Coleman under scrutiny.

The cooler at hand is by definition classic as it embodies the 70s profile to perfection. Indeed, if your parents have ever owned a premium cooler back in the day, it most likely looks like this Coleman. So, why is Coleman reviving a classic freezer style cooler?

Well, Coleman is a highly proliferated brand and that means that production often follows demand. Hence, the fact that we have a Steel belted Coleman is a solid indicator that there are a lot of nostalgic people out there who need a reliable cooler that brings back some memories. 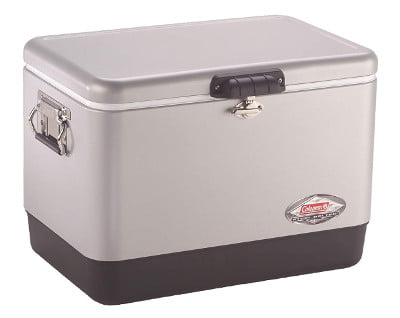 Variety is the spice of life but that doesn’t apply here since the Coleman Steel Belted line consists of one size only. Indeed, as unprecedented as it is, Coleman apparently pushed the idea of a steel belted individual cooler regardless of preference; well, all despite one.

Hence, the brand at hand might have completely dismissed a ton of potential costumers out there but that’s exactly what makes this cooler unique.

Accordingly, The Coleman Steel Belted comes in a standard 54 Quarts which is both capable and reliable for a variety of tasks.

Sure, this cooler is not made for anglers nor hunters specifically, but that leaves a huge slice of users to be discovered. Consequently, if you’re an avid camper, a BBQ addict or a standard family guy then you’re going to appreciate what this cooler has to offer.

Accordingly, the Coleman Steel Belted cooler measures 26 x 17 x 17 inches and that makes plenty of room for approximately 4 dozens of your choice beverage.

On the other hand, it is important to note that this cooler weighs around 20 pounds straight out of the box and it can only get heavier.

It is easy to say that the Coleman Steel Belted cooler is an exception to a market where all coolers look vaguely similar. Indeed, the cooler at hand is unique for its time and that gives it a lot of credit in the design department.

Accordingly, the Coleman at hand consists of a base plastic mold which then functions as a structure for the steel belt that surrounds most of the cooler.

As simple as it would have been, Coleman actually didn’t bother make a unified belt, instead the steel is bent around the cooler and meets around the back, leaving an annoying line right in the middle.

Further, the Steel fever extends to cover the entire lid of the cooler. However, the base was left in its initial polyethylene state for insulation purposes.

As far as quality is concerned, it goes without saying that Steel is stronger than plastic. Nevertheless, it also has some disadvantages. Indeed, the Steel Belted Coleman is made more robust due to its steel frame but prepare for some easy dents because that is what’s going to happen if anything bounced against the cooler.

Other than the bending qualities of this product, you will find that this Coleman is quite impeccable since every feature is built to last a life time and those that are under constant pressure – i.e. hinges – are easily replaceable. Also, the whole thing is coated in stainless steel which means that rusting is not a possibility. 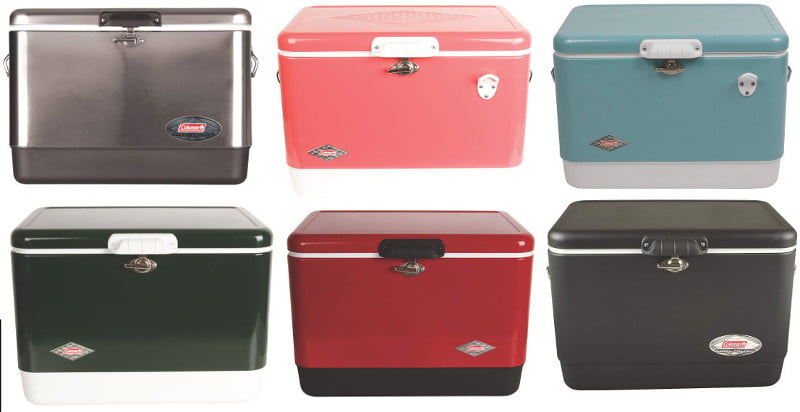 Most people allot a lot of their attention to the performance aspect of a cooler and they are right to prioritize it. Indeed, in the end of the day, what truly matters is how long can a cooler maintain ice. Hence, it wouldn’t come as a surprise to learn that this ‘budget cooler’ is a mediocre performer.

Indeed, the Coleman Steel Belted cooler is a casual cooler and that completely disassociates it with professional anglers and hunters. Nevertheless, we have tested this cooler in a variety of equally summer-hot environments and it managed to maintain ice for at least 4 days. But how does it work?

Glad you asked! The Coleman at hand features a retro insulation approach where the thin polyethylene mold is insulated via the steel case surrounding it. Now, this might sound counterproductive since metals have a high thermal conductivity. However, Steel is different because it has extremely low conductivity.

Indeed, when you think about it, a lot of products function by the same principle because stainless steel is such a good insulator. Nevertheless, the Steel Belt isn’t the only thing that enhances this cooler’s performance.

In fact, the lid plays a major role in the insulation process thanks to its airtight seal. Indeed, once locked, the cooler transforms into a containment zone that doesn’t allow air to circulates inside and out, thus pushing performance to the maximum in temperatures as high as 90°.

Features are a big part of any cooler because they are meant to facilitate and mediate all our interactions with the cooler. Hence, you would expect that Coleman has learned from its decades of experience before they produced the Coleman Steel Belted cooler and you would be right.

Indeed, the cooler at hand comes with a bunch of neat little features that embody the strength of steel with the functionality of Coleman coolers and they go something like this: 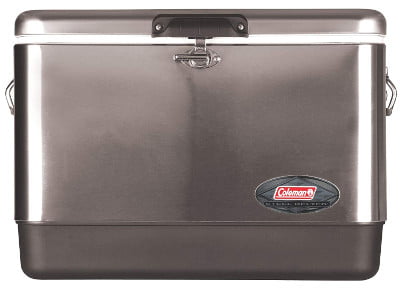 Although mentioned earlier, we just have to go back and admire the steel belt on this cooler.

In fact, the belt is not only decoration as it will pour in some valuable contributions to ice retention. Hence, the Coleman at hand is made tougher and definitely more reliable due to this retro feature & that’s why it ranked first on this list. 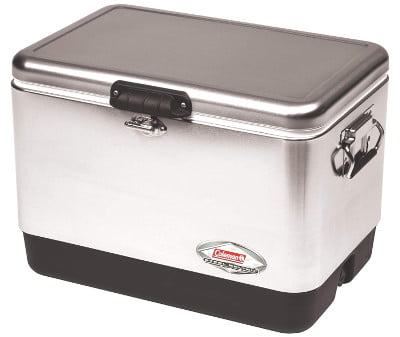 Most cooler lids nowadays are deformed and reshaped in order to appeal to a larger audience. However, Coleman Steel Belted doesn’t even try to follow that trend. Indeed, the lid on this cooler is as flat as it can be with the exception of a little bump around the edges to prevent anything from falling off the cooler.

Also, the lid harbors a nice little handle to help you open the cooler easily. 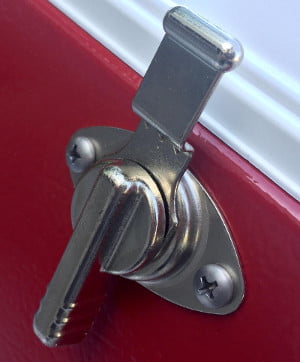 Before we discuss the value of this locking mechanism, it must be understood that the Coleman at hand is not designed for the wild west.

Accordingly, the Steel Belted Coleman features an easy access lock that is meant to keep the lid shut during transportation. Hence, do not expect this lock to function as a form of security because anyone or thing can open it. 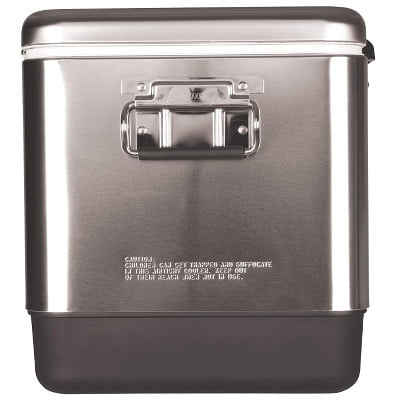 The handles on this cooler can easily be described as industrial because they are so tough. Indeed, this Coleman comes with classic stainless steel handles that are literally bolted into the cooler’s frame.

Further, since comfort is a priority during transportation, Coleman enhanced the rough handles with rubber grips to make carrying this thing less painful. 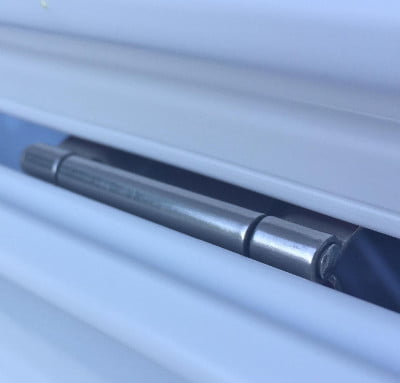 Hinges are the most critical feature on most coolers out there because once they snap, there is no going back for most coolers. Nonetheless, the Coleman Steel Belted is not like most coolers, which is why it comes with stainless steel traditional hinges.

The hinges are strong and designed cleverly to hold the lid open for you but in case they ever snap, you can easily find replacement for them everywhere.

While there are many positive aspects to this cooler, we believe that the draining system is a bit of a fall back.

In that regard, it is important to note that this cooler does not come with a valve system drain but rather a simple pull and push plug that is attached directly to the drain.

While this plug is practical, it is going to get in the way of the waterfall if you do not remember to push it back manually every time you unplug.

This is usually the segment where we go on and on about all the possible audiences for a cooler. However, the Coleman Steel Belted cooler is going to be a little different. Indeed, the cooler at hand is special in its own way and that usually means that the target audience is rather specific.

Therefore, as it has been established already, the cooler at hand is not designed for hustle. Thus, if you’re an angler, a hunter or an extreme sport lover then you’re not going to benefit much from this Coleman.

However, if you are a chill camper, a picnic lover, a BBQ fanatic or a simple family then you’re going to fall in love with the retro design and performance abilities of the cooler in question.

Coleman Vs. Yeti: Which Is Better?

We usually host a heated comparison between our discovered coolers and a prominent figure in the industry – usually Yeti – but this Coleman Steel Belted Cooler review is going to be a little hard given the fact that the Coleman is a single cooler and Yeti is a brand. Consequently, what we are going to do is compare our reviewed cooler with a standard Yeti Tundra 65. 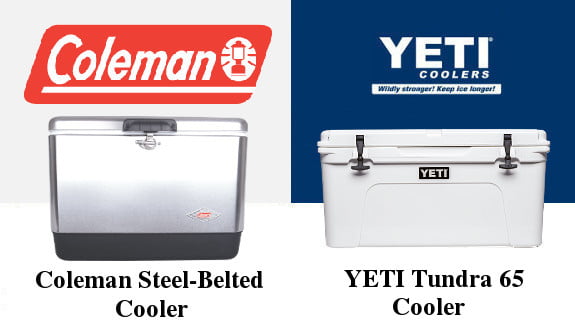 Yeti is a prevailing brand in the industry for many reasons but quality has got to be number one. Indeed, the brand built an entire reputation on how hard their coolers are and they have been successful so far. Hence, despite the resilient steel belt, the Coleman at hand is not as tough as the Yeti because one is an inch thick while the latter is at least 1.5 inches thicker.

Further, Yeti Tundra is popular for being a universal professional choice which definitely puts it ahead of the Coleman. However, the Tundra is easily an overkill for anyone who isn’t a hunter / angler. Thus, the Coleman Steel Belted is definitely more fitting for any casual user.

Performance is the determining factor for most coolers and it was expected to see the Yeti coming on top especially with the Fatwall insulation system that enables it to attain up to a week of ice retention.

Nevertheless, it is worthy of mentioning that the Coleman at hand is capable of reaching up to 5 days and it wouldn’t cost you a fortune.

To conclude our Coleman Steel Belted Cooler review, it is important to go back and emphasize the fact that this is a retro-design Coleman cooler and that is its biggest selling point. However, nobody expected such performance and durability from a product that is meant to make you nostalgic for the most part and most importantly, it costs a fraction of the price of a ‘premium’ cooler that can barely give you a couple extra days of ice retention.