Igloo is one of the few brands on the market that doesn’t need an introduction because everybody already knows what it is about. Indeed, this is a manufacturer that has been around for over 7 decades and stayed on top most of that period.

Hence, since it is impossible to tackle down Igloo in its entirety, we took the time to dig out some of their best performing lines and landed on the Super Tough STX.

The Super Tough STX line is a prominent Igloo ambassador & one that has accumulated quite some reputation. In fact, the STX line gained so much momentum from the get go for carrying the brand name but most importantly for offering so much value for an impressively little cost.

Accordingly, in this Igloo Super Tough STX cooler review, we will expose every little variable about this line, its features, sizes, advantages and disadvantage. That way, you can make an informed bying decision & hopefully land a cooler that would make your investment worthwhile.

In order to gain some legitimacy in the fast growing market of ice coolers, a brand must present its target audience with a large enough variety.

Indeed, variety is one of the most important criteria of a successful brand because it presents an opportunity to cater for the different needs and preferences of the buyer. However, since we are talking about a thread of a brand, Super Tough STX sticks to 5 humble options. 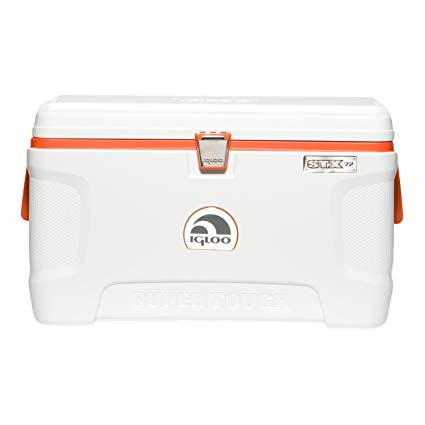 First player for STX is not a small cooler by any measure. Indeed, the Super Tough STX 54 is an average size cooler that is meant to facilitate the day to day outdoors grind.

Hence, the cooler at hand can handle up to 54 quarts or 51 liters and that makes it a viable option for avid anglers, hunters as well as an entire team of football given the fact that it can handle up to 83 12-oz can. 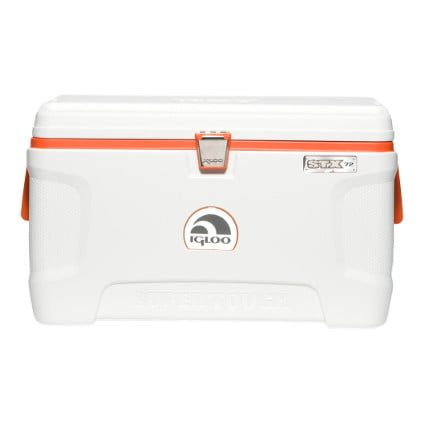 The STX 72 is a significantly larger option than the previous one but not too large to repel people who are interested in a compact cooler.

In that respect, the STX 72 exhibits a total capacity of 68 liters / 72Qt and that makes it highly reliable for long-term outdoors activities. 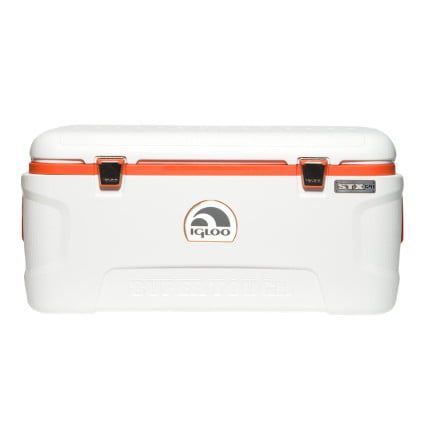 Next cooler in line is the Super Tough STX 120, which is a solid representative of mud grind.

Indeed, this cooler is built to work as hard as you would in the wild and that means resilience, performance & capacity. 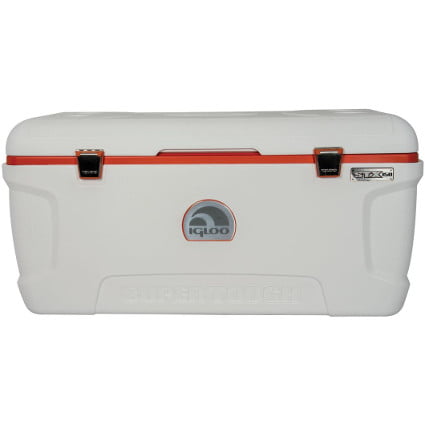 In order to avoid redundancy, we chose to combine both the STX 150 & 165 under one segment because the difference between the two is meager.
Accordingly, we are officially out of the casual & into the monster category because these two coolers are definitely not made for everyone.

Nevertheless, these coolers can still make a perfect fit for team based sport events and BBQ parties since they can handle up to 250 & 280 12-oz cans on average.

In order not to build up for disappointment, we will lay out the facts from the get go. The Super Tough STX line up isn’t a ‘look good’ oriented set of coolers but rather one that focuses more on resilience and simplicity.

That being said, the STX line is easily one of the most appealing budget line ups because it doesn’t look that bad. coolers have a lot of nifty little design features that make them stand out when compared to some coolers within the same price range.

On the other hand, quality is a completely different story because it is the driving aspect behind the Igloo Super Tough STX coolers. Indeed, as mentioned earlier, these coolers aren’t designed to appeal to the eye but rather blast through any kind of environment no matter how tough it is.

Hence, Igloo STX coolers are built out of the toughest Polyethylene materials in order to attain maximum resilience in most temperatures & landscape.

Also, the coolers are blessed with a rough finish that makes them far less likely to get scratched up or damaged upon transportation.

Further, all STX features are built with extreme care in order to attain maximum life spans.

In that respect, you can tell how robust these coolers are by inspecting the resilient stainless steel hinges & lid hooks as well as the robust handles, latches and lid.

You must have noticed that up till now, we haven’t mentioned roto-molding & that is because Igloo Super Tough STX coolers aren’t. Indeed, these coolers are not roto-molded, they are just normal budget coolers that are still capable of pushing through 5 days of ice retention easily. In order for this statement to make sense, we need to inspect insulation in detail.

Speaking of which, the insulation on STX cooler is easily superior to anything within the same price range. Indeed, Igloo Super Tough STX coolers are fused with as many ice retention technologies as you would imagine. So, let’s start from the outside and move in.

Starting at the top, all STX coolers feature Ultratherm® insulation which is a technology that relies on fiber glass blowing, resulting in fire resisting compose which is then sheltered within the polyethylene walls of the cooler. Accordingly, this type of insulation is unique, non-combustible, non-corrosive & odor free but most importantly, it is highly efficient.

Beyond the insulation system, Igloo Super Tough STX coolers are also enhanced via cool riser technology which is a design improvement that pushes the body of the cooler as high as possible from the hot floor. Hence, this process will significantly influence ice retention by keeping the cooler high & dry.

Moreover, in order to get Igloo Super Tough STX coolers noticed, the brand had to invest in a technology that protects these coolers from their worst enemy: the sun.

Accordingly, Santa was not about to let STX coolers down as they were blessed with UV inhibitors and infrared technology that literally shields the cooler against sun damage.

Quality & performance are one thing but features are a completely different story. In fact, a lot of people out there base their purchase decision primarily on features because it often regulates / facilitates your activity.

So, ‘what should you expect from Igloo Super Tough STX coolers & how practical are they’ are two questions that we’ll try to answer in the current segment.

The handles on STX coolers aren’t unique to be exact but they are extremely robust. Effectively, nothing beats a rubber grip robust handle when you have to carry a huge cooler around on a regular basis. 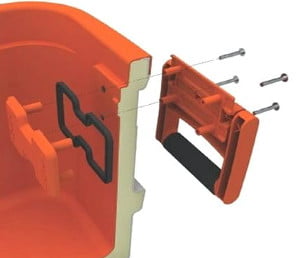 Consequently, it was intuitive for Igloo to opt for this type of firm plastichandles since all STX coolers are significantly large.

PS: the handles are connected via a bolt-through system that will prevent the handle from snapping at any point. 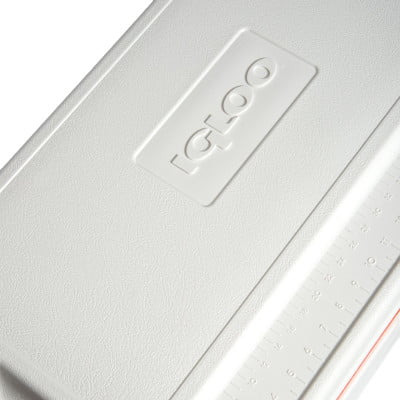 Lids are a rich spot for coolers because they can cram in so many interesting features. Hence, it wasn’t that hard for Igloo to introduce cup holders, built-in rulers and a reliable casting platform via the lid. 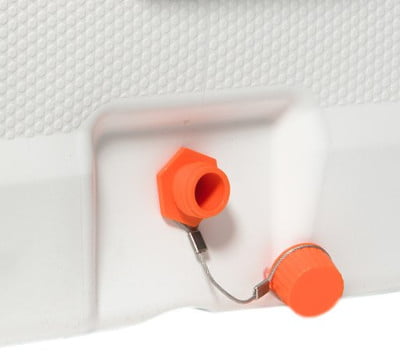 Like most premium coolers out there, Igloo Super Tough STX coolers come with a reliable outlet for water that can be upgraded.

Accordingly, the included valve on STX coolers isn’t the best quality but it sure gets the job done. Moreover, since it is a valve draining plug, you can ease out the cap and drain out the water safely without risking loss of ice. 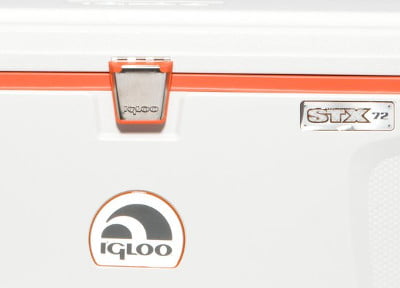 The latches on STX coolers are interesting since they strayed away from the casual T-latch and explored the clip on approach.

Indeed, these clip latches are easy to use and robust enough to last a life-time.

As mentioned earlier in this article, the brand doesn’t take performance lightly which is why we have Cool Riser technology.

The technology is rather simple yet highly efficient as it makes sure the cooler’s body is high enough above the hot surface.

Consequently, with minimal contact with anything hot, performance will improve significantly.

As it’s been the habit in our ice chest reviews, here is a list of honorable mentions that couldn’t make the cut: 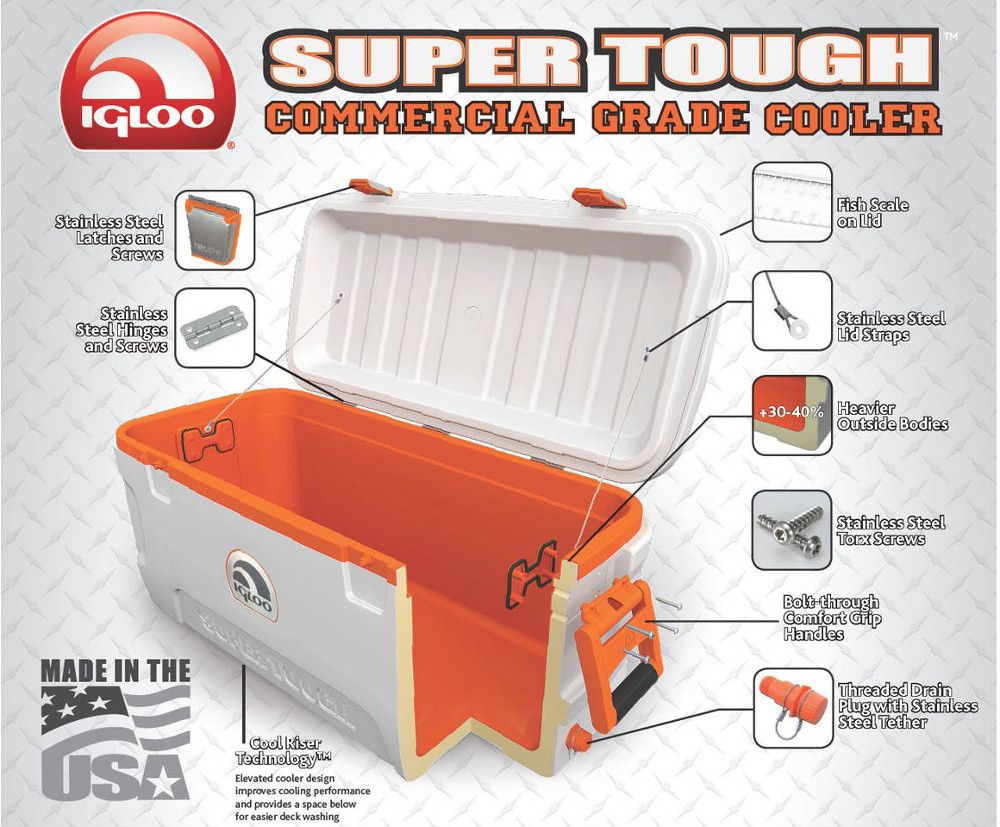 While it is rather hard to determine who are they for exactly, it is easier to tell that STX coolers aren’t made for the casual Joe.

Indeed, these coolers are made for people who do this for a living or at least those who are very passionate about their Angling & hunting careers.

Further, given the available variety, it is very likely that these coolers would appeal to team sports organizers, parties and the occasional BBQ reunion.

Igloo Super Tough Vs. Yeti: Which Is Better?

It has become a ritual on our website to compare our discovered coolers to a prominent light tower in the industry. Hence, since the brand of choice is still Yeti for multiple reasons, here is a little comparison to show where Igloo Super Tough STX coolers stand. 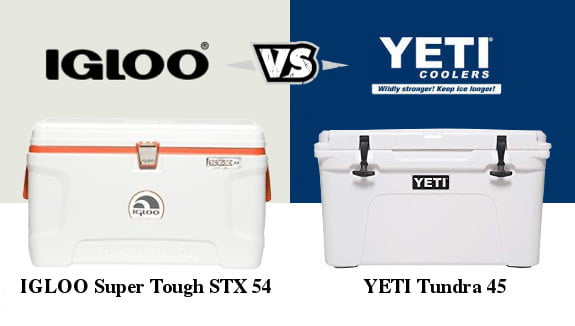 Let us premise this segment by pointing out the massive price gap between the two contenders. Indeed, there is no way to mitigate the price difference between a Yeti and an Igloo Super Tough STX cooler given the fact that the smallest Yeti is still at least a hundred buck more expensive than the biggest STX.

That being said, it shouldn’t come as a surprise that the Yeti Tundra, for example, overtakes Igloo STX in terms of variety. In fact, the STX line comes one cooler short with its 5 coolers against this giant and that is impressive.

Moreover, quality isn’t the biggest advantage for Igloo Super Tough STX coolers either since they are significantly less dense than the average Yeti coolers. Hence, while Yeti coolers are guaranteed to last you a life time, an Igloo STX cooler is more likely to give up with a few decades of labor.

Finally, the one element where STX coolers actually stand as high, if not higher, than Yeti cooler is in performance. As silly as it sounds, an STX which is easily a fraction of a Yeti’s cost can equate it in terms of ice retention. So, you be the judge of that.

To wrap things up, our Igloo super tough STX lineup review was primarily meant to highlight the advantages and short comings of this line & hopefully we were successful at pointing you in the right direction. Thus, if you’re seeking a robust, budget cooler that can match the performance of most premium coolers then you’ll be more than satisfied with an Igloo STX.

However, you need to remember that whatever costs less isn’t going to last as long. So, you got that little riddle to solve for yourself.