CohoOutdoors is a relatively young face in the industry of ice coolers. However, that didn’t stop it challenging some of the bigger brands. Despite its young age, Coho has established a firm foundation in the upcoming side of the industry with a humble variety and a formidable strength.

Nonetheless, it takes quite some time to convince anyone to invest in a new name because it often lacks a reputation. So, in order to help bridge this Grey area, we are going to dedicate this entire article to a proper Coho cooler review.

Consequently, the following in-depth analysis will discuss the variety aspect, the quality / design and the prominent features of Coho coolers. So, without any further adue, let’s get right into it.

SIDE NOTE: Recently, it’s extremely hard to find Coho Coolers available for sale online. In addition to our in-depth Coho review (continued below), we’ve provided some of the best selling alternatives below: 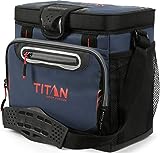 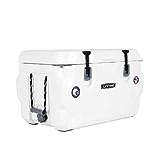 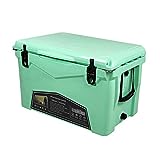 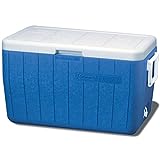 Variety is undeniably critical for upcoming brands since it is the one factor that defines a target audience.

Accordingly, we can’t really argue that Coho sits on a formidable selection. However, we can definitely support its ambition to invest in both hard and soft-sided coolers from the get go. On the softer end of the spectrum, Coho presents another individual product and the focus here is on the RealCold™ Soft Ice Bag. Now, we were definitely expecting to see a little more variety in the soft-sided department but we were slightly disappointed to see a single cooler.

Nonetheless, we are not here to judge the brand’s production choices as much as to judge the products themselves. Hence, the RealCold soft ice bag is a little wonder of its own since it measures an interesting 14-3/8″×12″×15″.

The reason why we described it as such is because new brands generally opt for smaller cooler in the early stages in order to avoid any high expectations. Therefore, it was definitely a pleasant surprise to see a rather larger soft-sided cooler on display.

Accordingly, the cooler at hand is going to make a formidable fit for riverside fishing, camping and picnics in terms of size. Indeed, the Coho soft cooler at hand is large enough to handle a significant number of cans, snacks and ice and that is often synonymous with longer ice retention periods. 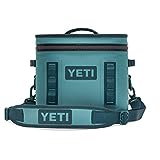 When it comes to hard shelled coolers, Coho decided to stick to a standard 55Qt cooler and that’s a great point to start from.

Truly, the cooler in question is developed cleverly to cater for a variety of preferences and needs, including anglers, hunters and wilderness lovers in general.

Consequently, the cooler at hand measures 15 7/8″ x 17 1/4″ x 27 5/8″, and it’s capable of handling a lot of fish, drinks or standard camping provision. However, it is important to note that it initially weighs 25 pounds and it can only get heavier.

Thus, without wheels, you are advised to plan your journey before you bite more than you can chew. 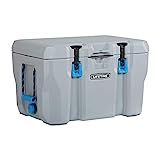 In terms of design, the Coho selection is noted by a sense of belonging since the brand doesn’t try to stand out by any means. Hence, both the soft and hard sided coolers are very uniform with the norms of the industry and they tend to respect the structural integrity of most prominent brands out there.

Accordingly, both Coho coolers adopt the popular design technologies that aim at improving performance and extending longevity such as raising the hard cooler slightly above ground level to keep some distance from the hot pavement and making the soft cooler’s edges rounder to fortify the liner’s structure and prevent easy damage.

As for quality, the brand at hand is still within testing grounds and we haven’t had enough time to actually test it for extended periods. However, from our initial remarks, we could deduce the invaluable effect of the thoughtful craftsmanship, the dense / thick walls on both hard and soft sided products as well as the detailed precision on smaller functional parts.

Ice retention is a critical aspect to say the least because it is often the main motive behind our purchase. Accordingly, based on our controlled tests, we concluded that Coho coolers are pretty decent considering their price range and build quality.

Now, obviously, you don’t want to hear ‘decent’ when talking about performance because it doesn’t mean much per say. Hence, to put it simply, the soft sided Coho cooler managed to attain between 24 and 36 hours in varied temperatures while the hard sided Coho pushed through 4 days on regular.

Consequently, the brand at hand might not be Yeti but the dense 30mm liner on the soft version and the thick ExtremeCold insulation on the hard cooler seem to work decently and that’s the best we can say about this brand.

Features are less significant than performance but significant nevertheless. Hence, the following segment will take into charge listing and detailing some of the brand’s most prominent features on both soft and hard sided products.

Coho Vs. Yeti: Which Is Better?

It is a tradition on our website to compare the newer brands to a milestone such as Yeti. However, it is going to be extremely difficult to pull this one through since they are simply too different.

Thus, in brief, Coho is a highly limited brand with decent performing coolers on both ends while Yeti is a conglomerate with enough coolers in one individual series to drown Coho entirely.

To wrap up our Coho cooler analysis, we must bring about the most prominent aspect of the brand. Hence, Coho is a highly affordable option that provides a satisfying performance and reliable products.

If there is anything that we’d like to highlight before we wrap up this Coho cooler review, it would be the brand’s dedication to mirroring premium quality products for a significantly low cost.