We like to keep things fresh and going on our website which is something we do out of passion and care for our readers.

We do the research and testing to find some of the best coolers out there so you don’t have to struggle much with finding information and picking your next cooler.

This time, we’re going to introduce you to a seriously lit coolers’ line with the perfect name for the unique concept they’re presenting.

As to not drag this any longer; you’re reading a LIT Coolers Review which we’re sure is going to be a game changer for your day trips, events and adventures but most importantly; LIT Coolers are here to bring light to your fun nights because they’re featured with the unique Night Sight Technology that’s proved to be their exclusive signature mark.

LIT Coolers come in 3 different sizes which all are not on the “huge” scale. They feel more like personal coolers that can be taken anywhere in the back seat or coffer of your vehicle especially the smallest one of them. However, their storage capacity is great for a whole bunch of outdoor scenarios. 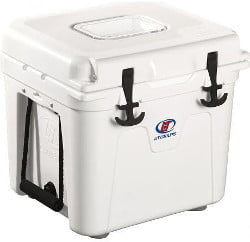 This cooler offers a solid 22 qt of storage capacity and that can do great for both personal use and gatherings with family or close friends. 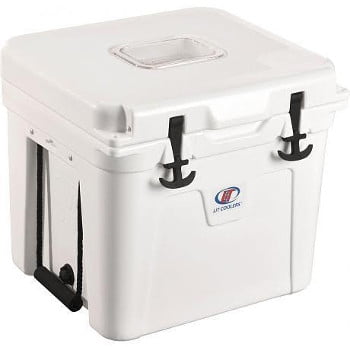 Unable to help but remember Beyoncé, the Halo can hold up to 30 cans which means that this guy can take on bigger gatherings and events where everyone is guaranteed to get his/her fresh drink.

The Halo TS-400 cooler at hand is 32 qt which can work just fine for short camping weekends or anything of the sort. 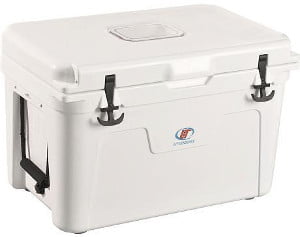 This cooler is LIT’s largest family member; it’s 52 qt which will definitely work a lot better for longer trips and bigger events where you need drinks for more than what a backyard can handle.

The Torch TS-600 can store up to 48-50 cans or a solid 60 lbs of ice which is more than enough for any kind of outdoor activity. 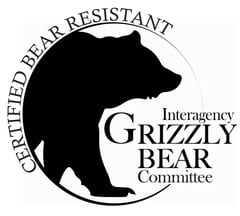 This is where LIT Coolers proved that they’re thinking outside the box to create innovative coolers that are worth your while. And personally, this is the part that I’ve been dying to cover.

First of all, LIT Coolers are all roto-molded which takes them all the way up the coolers industry’s pyramid. Not only that, they’re also Certified Bear Resistant which puts them head to head with the coolers industry’s greatest pioneer; YETI. That being said, you can only guess that these coolers are definitely up to some serious beating which they surely can handle easily.

LIT Coolers got a heavy duty construction to them with a 5 year cooler warranty to back you up. All the features known to a good cooler are strongly present on each and every LIT cooler with a different concept to them; LIT Coolers LIGHT UP every time you open them for you to have a better night vision into the content of your cooler.

The Night Sigh Led Liner is part of LIT Coolers’ design which makes them a lot more attractive, functional and flexible. Now you can camp with a unique style while still have your goods all safe and cool without worrying too much about what’s around you because this led liner is 100% water proof which adds greatly to its purpose and functionality.

There is also a logo plate on the coolers’ lid which contributes to their design aspect allowing you endless personal customization that you may check on LIT Coolers’ official website in case you’re interested.

All in all, LIT Coolers offers quality coolers with a great twist to a coolers’ concept that we all grew to know in the last few years and that’s something we needed to see for a change.

Things usually get more serious here because after all, and to be frank, this is what a cooler is all about at the end of the day.

LIT Coolers did not forget to upgrade this aspect of their coolers just like they did with their lit light feature; that’s why you’ll find 4 Lit Ice Legs in each of LIT’s coolers. These ice legs are easily attached/detached to be put in the fridge before being used so that they help keep the cooler’s chill temperature.

They don’t take up much space from the cooler’s interior as they add up greatly to the thick insulated lid. Thus, when you fill up a LIT cooler with ice, know that you’ll be getting double the effect with those Ice Legs.

These two factors together in addition to the insulation foam injected to the coolers’ walls result in an ice retention that can last for at least 5 days under different circumstances without losing much ice.

LIT Coolers promises an insulation performance that’s as good as any pioneering brand that makes roto-molded and foam injected coolers which will bring us to talk about Yeti eventually.

Getting this far, I’m pretty sure that we can all agree that LIT Coolers did what everyone else couldn’t do, and that’s putting more work into their coolers to come up with a cooler that’s 100% functional, innovative and better than “ordinary”.

We’ve already mentioned couple features but let’s go through the whole thing again for the sake of how good it all is: 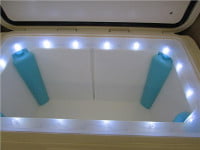 LIT Coolers are featured with an original Night-Sight® Technology LED Liner which is meant to make the cooler look 10 times cooler but also offer a better night vision when you’re digging inside your cooler to find a snack or a drink. This liner is rechargeable, it changes color and it comes with an on/off button near the lid.

This is not something you’ll find anywhere else, LIT Coolers are very serious about the quality, originality and professionalism put into their coolers, thus; here we are today with a unique cooler that offers better night vision for stronger and better utility. 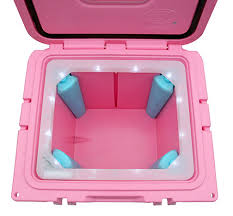 Next, there are the LIT Ice Legs which are guaranteed to prolong the cooler’s ice retention ability. They look awesome and it’s super easy to have them attached to the cooler.

Again, this is an original feature that we happened to witness for the first time with LIT Coolers, and if this says anything at all it would simply be that LIT Coolers are willing to go the extra mile to make something exceptional that’ll change how we feel about coolers.

If you look at the lid, you’ll find a transparent Customizable Logo Plate which can be personalized in any way you wish for.

It’s another exclusive feature to LIT Coolers which will help you own a cooler that represents only you. 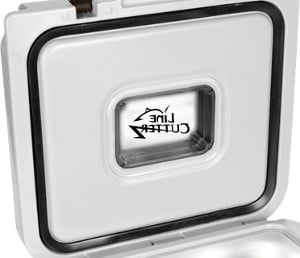 Lit coolers are featured with a 2.5″ rubber gasket seal that works hand in hand with the insulation technology for a better ice retention result.

The Gasket works on preventing the cooler’s temperature from easily going high due to environmental circumstances especially when the lid is being opened every now and then. 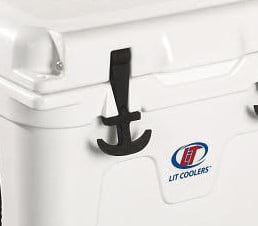 Now to keep the lid firmly closed, there are 2 marine lid latches on each LIT cooler.

These latches are rubbery, flexible and are guaranteed to remain in place once you lock the lid. 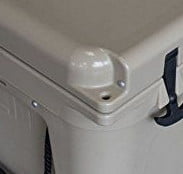 To make the cooler even safer, LIT featured their coolers with built-in lock holes for maximum security.

You can lock your cooler using any standard lock that you have and leave it next your tent while you discover around. 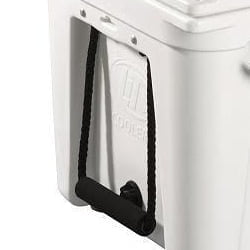 Another feature is the nylon rope handles that are super practical to use.

Once the cooler is fully loaded, 2 people will easily find their way to carrying it anywhere they like.

These feet are made of rubber which means that the cooler stays in place regardless soft of wet surfaces.

Last but not least, LIT Coolers are featured with heavy duty hinges that are guaranteed to last for years of extensive use without getting worn out.

LIT Coolers come in a variety of colors; Red, Pink, Gray, Blue…and more which serves the diversity purpose allowing everyone to find the best cooler suited for them.

Given LIT Coolers’ sizes, one can easily guess that they’re meant for small gatherings with friends and family. However, the Firefly for example is something that can perfectly serve as a personal cooler for anyone who’s always on the go or for someone whose work demands being most of the time in the outdoors.

The same thing goes for the Halo and Torch; they’re great for camping, tailgating, and why not fishing. Everything is possible with LIT Coolers since they offer great ice retention, durability and night vision.

Not only that, hunting is also an option here since LIT Coolers are Bear Proof; in other words, these coolers not only meant to look good and lit but also to be jagged and tough.

If we come to learn anything from this LIT Cooler review it should be the awesome work this brand did to introduce something different, something unique and almost incomparable. 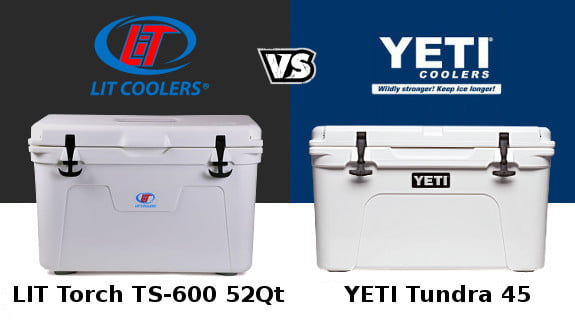 Now though Yeti is known for being the industry’s number one leading conglomerate with a huge platform of options, sizes and colors to choose from, LIT Coolers came up with a couple features that won’t be found anywhere else; the LIT Night Sight LED Liner and the LIT Ice Legs.

Anything else; both YETI and LIT coolers are Bear Proof, durable, and they have nearly similar ice retention ability. However, one thing is for sure Yeti coolers have higher end production which seems like something they’ll always be better at.

If you’re looking for a cooler that can do the job, look good and light up your fun nights with your friends and family then LIT Coolers made something exactly to meet that.

This is an innovative line that we got here which pushed harder than everyone else to come up with something creative, good looking and yet 100% functional.

That being said, this is the end of our LIT Cooler Review and it honestly was quite a lit journey getting to see and test these bright boys.