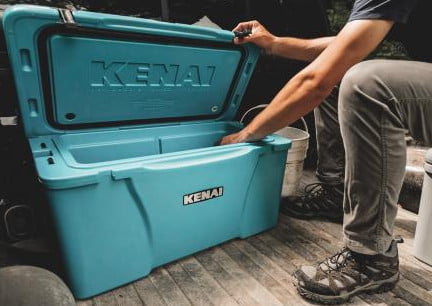 Kenai isn’t exactly a brand of its own but rather an extension of Grizzly, the thing which makes a lot of sense. Grizzly has been a leading manufacturer in the industry of coolers for quite a while now and it was about time they produce an affordable choice.

There is no sugar coating the fact that Grizzly produces some costly premium options. However, in a quick growing market, the brand realized that there is plenty of potential and opportunity in the affordable cooler division, hence the Kenai.

Let us premise this review by reminding ourselves that this isn’t a cheap cooler; not at all. In fact, the Kenai at hand is rather reasonably priced for the value it offers and that’s exactly what we’re talking about today! 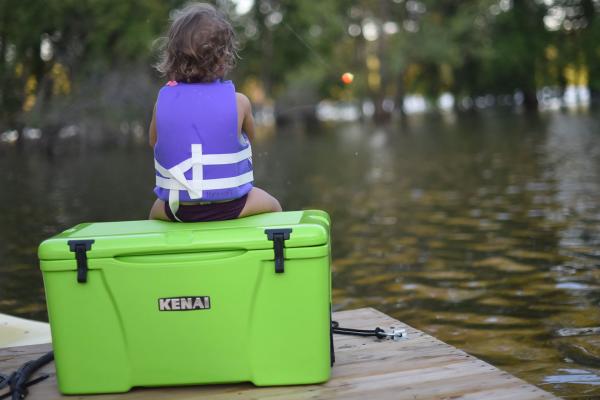 Since we always initiate our reviews with an objective depiction of a brand’s variety, we thought we should stick to it despite the fact that the Kenai lineup is only represented by a single cooler at the moment.

Nevertheless, sticking to a single cooler is going to limit the targeted audience range drastically. So, in hopes to see more Kenai coolers on display in the future, here is what you can expect from the one and only Kenai 45Qt.

First things first, the cooler at hand is a strategic option since it is compact enough to fit nicely on any vehicle or boat. Also, the Kenai ice chest can handle up to 45Qt, the equivalent of 43 liters, and that’s plenty of space for an entire fishing trip for small game anglers.

Speaking of which, this cooler stands at an interesting intersection since it is large enough to cater for individual anglers / hunters and compact enough for campers, kayakers and that one guy who enjoys drinking in the woods sometimes.

Since design is often disregarded in cooler reviews, we thought that it deserves a bit of a highlight. Hence, the Kenai isn’t exactly the most unique looking product in this part of the market but that’s exactly why it’s so reliable.

In that respect, the cooler at hand adopts the familiar raiser technology that aims at lifting the cooler’s bottom to avoid the hot floor as much as possible.

Also, the Kenai sticks to a standards rectangular shape with friendly round corners to reduce the risk of poking yourself in the knee every time you try to move. Further, this product displays a much larger lid smile to make opening the cooler much easier.

On the other hand, there are a couple of drawbacks in terms of design and they are first to be noticed. Accordingly, the cooler at hand goes for a rather slid lid which is supposed to take on violent sun attacks.

Also, the cooler is finished using a smooth polyethylene coat which is bound to get scratched up pretty quickly, considering the fact that this is an outdoors cooler.

To sum things up, the 45Qt Kenai ice chest exhibits traditional yet essential design schemes that ensures longevity and better performance which in all honesty shadow most of the drawbacks in design. 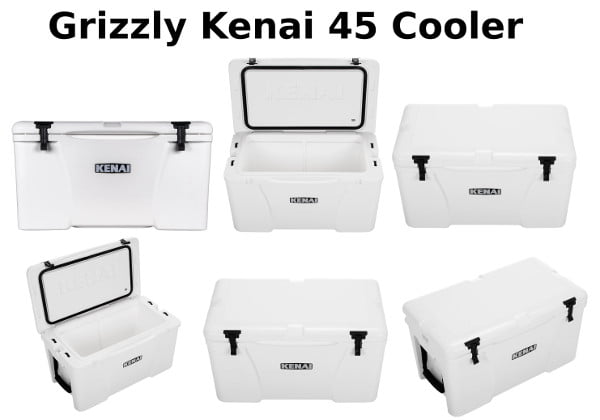 As far as quality is concerned, there is one keyword here and that is rotational molding. Yes, as affordable as it is, the Kenai is a roto-molded cooler, which means it is stronger & more efficient.

In that respect, the cooler at hand is built using a dual axle motion machine that bends the polyethylene base to create a tough & unified mold. Once the process is finished, the cooler’s frame is injected with high density foam, creating a weakness free body that is capable of handling being dropped off a high building.

Further, beyond the roto-molded build, the Kenai exhibits a clean final precision, which is highly visible in the smallest details of the cooler. Hence, a closer look at the features and moving parts will give you the impression that you are still dealing with a premium grizzly cooler for almost half the price.

Grizzly coolers have grown fairly popular in the last few years because of their ability to fend off wild animal attacks. Nonetheless, performance is still the selling point for the brand, which makes us wonder if that applies to this Kenai cooler as well.

Performance is key for ice coolers since it can significantly influence the target audience. While a lot of people out there would only need a cooler that can get them through a couple of days, others need ice chests with the ability to cover a week’s journey.

That being said, the Kenai special edition is a promising cooler because it plays by the guidelines of most premium coolers out there. Yes, this unique cooler is Rotomolded and that should give you an insight on performance since all Rotomolded coolers have a common average of 5 days ice retention period.

Also, beyond the benefits of a unified mold, the Kenai 45Qt features a high density / environmentally friendly foam insulation that is going to significantly improve ice retention. Indeed, the foam filling consists of thousands of tiny bubbles that dissolve heat upon contact, reducing its effect gradually.

Moreover, being a direct relative of Grizzly coolers, the Kenai could not be displayed without proper lid insulation. In that respect, one of the smallest yet most effective features of the Kenai is that freezer grade rubber gasket that creates an air-tight seal once the lid is locked.

Hence, once locked, the cooler will perfectly contain frosty air and forbid hot air from coming in.

All in all, the Kenai is clearly capable of handling solid adventures since it can easily attain 5 to 7 days on average, depending on the overall temperature. However, there’s a question that must be answered before you figure out if it’s the right cooler for you & that is: who is it for?

There are a lot of things that contribute to the profile of a cooler and features are not far from the center. In fact, features are often the focus of many buyers because they can determine your entire experience since they are the only way to interact with your cooler.

Accordingly, the least we can say is that Kenai has done a formidable job, maintaining a familiar yet rich profile with all the features you need. So, here’s what to expect from a Kenai!

The lid of ice coolers is often employed for occasional tasks but the Kenai is one of the few coolers out there that actually put some thought into it. Hence, this cooler’s lid is designed to be more grippy in order to allow you to use it as a casting platform, a seat, a cutting board or even a dining table.

Further, the lid of the Kenai features 4 indentations to allow for an easier / more secure tie down process. Hence, if you’re planning on keeping this cooler on your truck or boat, you won’t have to worry about it sliding around and probably damaging itself or even injuring passengers.

One of the least celebrated specs are the rubber feet on most premium coolers and we just cannot let that slide (pun intended).

The rubber feet on this Kenai are going to prevent it from sliding over effectively which should make the cooler a lot safer to use.

PS: You can buy sliding-feet separately if you’re planning on pushing this cooler around for a living.

There aren’t many features on this cooler but the freezer grade gasket is definitely worthy of some praise.

In fact, this small addition plays a major role in the ice retention process as it ensures a tight seal on the cooler and maintains the cold air within for long periods of time. 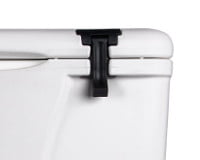 T-latches come in a variety of designs but the concept is pretty much the same. This kind of latches is very common amongst premium brands because they entail ease of use and efficiency.

Thus, once you lock down that lid, the rubber latches are going to squeeze it down tight on the gasket, reinforcing the seal.

One of the most anticipated features on hard-sided coolers are the handles because they determine the degree of ease of transportation, especially when talking about large coolers. Hence, Grizzly decided to go with flexible rope handles for the Kenai with a padded grip for added comfort.

Also, it is important to note that the flexibility of rope handles will make transporting this cooler on uneven surfaces a lot easier.

In case you will be handling this cooler alone, you can always opt for the built-in handles, which are far more supportive and easy to grip.

The Kenai is a very versatile cooler since it happens to be the right size for many hobbies & outdoor activities. Truly, the fact that this cooler is capable of delivering an impressive performance and that it is capable of handling up to 45Qt opens up a wide variety of targets.

In brief, the cooler at hand is a formidable companion for any kind of outdoors activities given that the number of users will remain under 3.

That being said, the Kenai is great for anything from a multi-day hike, kayaking, camping, angling and even small game hunting.

Nonetheless, it is important to keep in mind that this cooler can play less serious roles for those who are looking for a chest to keep drinks frosty on a hot summer night outside, a BBQ party or just a regular day by the swimming pool.

Kenai Cooler Vs. Yeti: Which Is Better?

As it’s been the ritual on our website, comparing the Kenai to a Yeti is almost indispensable. Truly, this little segment could give you plenty of insight and help you make your mind definitively when at a loss. Thus, if you’re certain you’re sticking with the Kenai you can as well just skip reading this part. 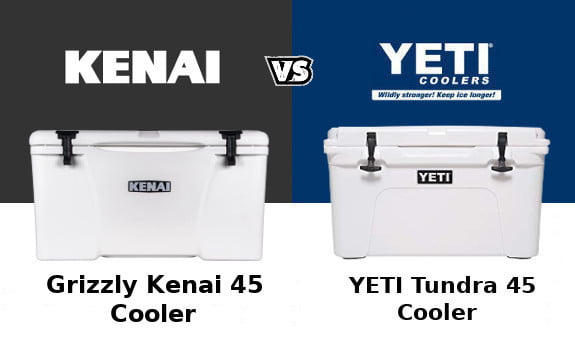 If you stayed along however, we are going to do a quick run down comparison of the Kenai 45Qt to the extremely popular Yeti Tundra 45 since it is the closest contender.

First things first, we simply cannot judge the Kenai on the basis of variety because it’s a stand alone product for the moment. Thus, we’re going to cancel this criterion. However, what we can’t avoid is the quality aspect.

Indeed, the Yeti Tundra 45 is a beast of a cooler which is easily twice as tough as the Kenai. On the other hand, the Kenai is still a roto-molded option with enough strength to get you through a life-time of use.

In terms of performance, the Yeti Tundra is ahead but not by much. The Kenai is a decedent of Grizzly and it has inherited pretty much all its performance traits. Hence, both the Yeti and Kenai stand side to side at the 5 to 7 days ice-retention life record.

As far as features go, both coolers seem to be fairly similar with a slight advantage for the Yeti due to the clear mastery of craftsmanship and the impressive dedication to the smallest of details.

Finally, Grizzly’s Kenai is a highly recommended cooler because it exhibits the traits of a premium end cooler for an impressively low price tag.

That said, once you weigh out your options in a supposedly competitive market, you’ll almost always result to the fact that the Kenai lands amongst the best affordable cooler options out there.

So, if you’re ready to enjoy the outdoors, don’t hesitate to pick this cooler as your companion.