RTIC is an American cooler brand that’s proud to announce that they’re “the brand, the importer, the shop, and the marketing arm, all in one”; which means that RTIC is selling their coolers directly to the customers and that cuts a lot of expenses resulting in premium quality coolers for prices that are somewhat reasonable.

RTIC is known for their hard roto-molded coolers but this is going to be a RTIC Soft Cooler Review because soft coolers are on a high demand lately given the amount of time a person spends out either traveling for work or leisure, and that requires a practical cooler that’ll keep you going during the day with fresh drinks and snacks.

Let’s not make this intro any longer and hit talk about all of RTIC Soft Coolers.

RTIC offers 4 different sizes in this category and they all look super rugged which we’ll talk about next; as for now, these are the specs of each available size: 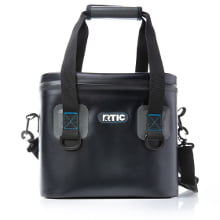 This is probably the most personal soft cooler we’ve ever come across weighing 2 lbs; it’s compact, small and light. 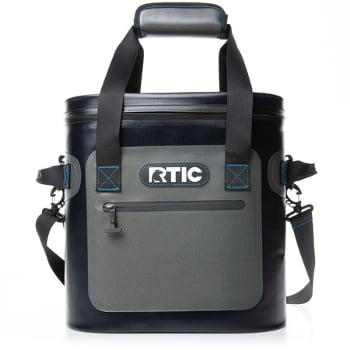 The RTIC 20 could still be considered a personal cooler and you can fit enough inside of it to serve 2 people’s need or more very nicely and comfortably.

Things are only getting more interesting because the bigger the cooler the more it’ll handle and that means larger company and longer quality time. 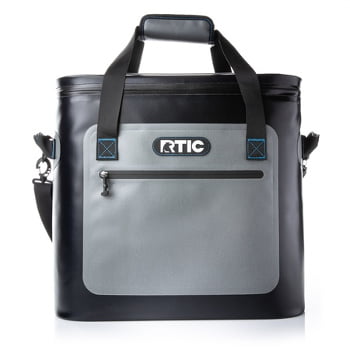 This is the biggest soft cooler by RTIC and it’s 18.5” x 17” x 12” (L x H x W), and even though it’s the biggest it remains easy to handle because that’s the main purpose behind a soft cooler.

The RTIC 40 weighs 5.5 lbs empty and you can pack 40 cans inside of it or 40 lbs of ice and that makes it a great choice for larger gatherings that require ease of mobility.

Looking at these buddies, the first thing everyone could agree on is how sharp and rugged they seem. The RTIC Soft coolers are made of Heavy Duty Nylon Shell that’s hard to damage; it’s durable and water-proof with a no-sweat exterior for a dry journey so as not to get your car seat wet.

The laminated fabric and welded seams used to build the RTIC Soft coolers are tough and light at the same time for a smooth experience carrying the cooler even when it’s loaded.

Even if the cooler is empty you’ll notice that its body remains firm and maintains its sharp shape to withstand possible impact while transporting the cooler.

Moreover, the liner used on the RTIC Soft coolers is Anti-Microbial to keep your goods safe and healthy in case of contact. Now all of these aspects together resulted in a line of coolers that’s super rugged and sharp which is great for both professional and casual use. 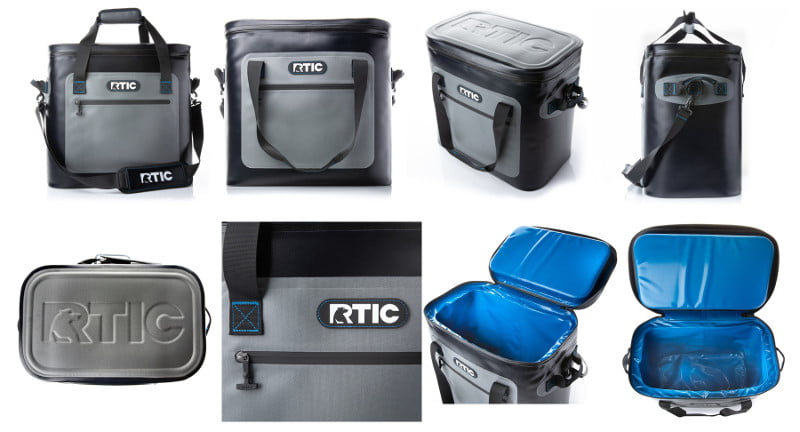 A soft cooler is meant to be practical and easy to use because you don’t always need to pack a lot for a short trip that might last couple of hours only. Thus, these soft coolers are not expected to deliver an ice retention ability that’d last for days like hard coolers.

That being said, the RTIC Soft coolers are featured with Closed-Cell Insulation with 2″ of insulation foam on top and 1″ on the sides to lock the cold in. this amount of insulation will at least offer you a good performance that’d last for a whole day under the right circumstances.

If you’re fortunate enough to change or add more ice into the cooler you’ll be even happier with the results.

All in all, RTIC Soft coolers deliver a performance and value that are very compatible with what you pay for compared to other brands that might cost you double the price for the same size.

It’s always the small things that make a difference when it comes to any type of products. The RTIC Soft coolers are well equipped and versatile with a set of main features on each one of them:

Now let’s give it a moment and notice what’s missing; there is no featured bottle opener and no grids to which you can attach some additional tools. This is not something we can’t tolerate but they would’ve been a nice add that we might find on many other premium quality coolers.

Given the fact that RTIC Soft coolers come in 4 different sizes starting with the smallest one the RTIC 8, we can confidently say that these coolers are more on the personal side of the options.

It’s not like you can’t take these coolers with you on a camping journey, but they are better suited for light uses that wouldn’t last longer than a day such as a picnic, river-fishing day, a day on the beach, a lunch break…or more.

RTIC Vs. Yeti Soft Cooler (Hopper Flip): Which Is Better?

To sum up this RTIC Soft Cooler review we must talk about Yeti because this brand is considered the bar setter as we’re pretty sure mentioned before. Thus, this is going to be a short comparison between the YETI Hopper Flip soft cooler and RTIC Soft coolers. 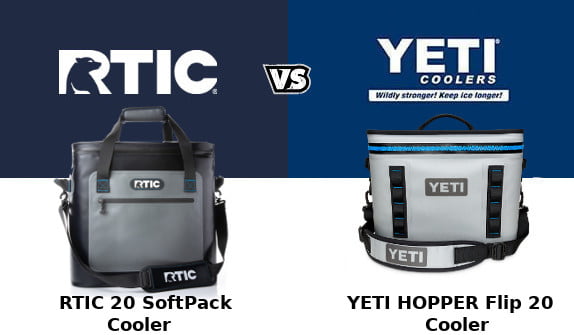 Both brands are American and are known for their premium quality, however, RTIC claims that their coolers, soft or hard, are “over built, Not over priced” and that leads to the fact that the Yeti Hopper Flip 18 is double the price compared to RTIC 20. However, a lot of users admitted to the fact that the materials used on Yeti Hopper Flip soft cooler feel somewhat more durable.

Now in terms of design, both are pretty much the same except for the grid lines that Yeti featured all of their soft coolers with. RTIC soft coolers come simple and basic without this detail that adds more potential and functionality to the cooler.

Getting to ice retention and insulation ability, YETI uses COLDCELL™ INSULATION while RTIC uses Closed-Cell Insulation which both function the same way preventing the cold from leaving the cooler resulting in a no-sweat exterior. Yet, running some really simple tests, we were surprised to find that RTIC Soft coolers performed slightly better than Yeti’s in the shade and that means that paying more for a Yeti won’t get you an insulation performance that’s tremendously better or stronger.

Getting to the end of our RTIC Soft cooler review, you can clearly see that there’s no way anyone could go wrong with a RTIC cooler; they’re durable, functional and they look darn good.

So whether you opt for it or not is nothing but a personal preference which you may build on looks, price, or performance.