Unlike what many people might think; Igloo is an ancient name in the industry of coolers. It all started back in the 50s with Igloo’s first beverage cooler all the way to their latest coolers and products made in our present time.

Igloo made more than just one line of coolers; doing just a little research, you’re going to find plenty of choices that are sure to meet what you’re looking for under their name. However, in this review, we’ll closely introduce you to one of their most popular coolers’ lines; the Igloo Yukon.

The Igloo Yukon is a simple coolers line that’s meant to be simple and versatile and it only comes in two sizes: 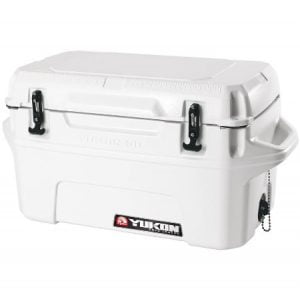 This one right here weighs something around 29 lbs which shouldn’t be hard to handle. Also, the spacious interior that offers a solid 50 qt makes this cooler great for short camping trips, road trips and even hunting or fishing given the fact that it’s meant for heavy-duty outdoor activities. 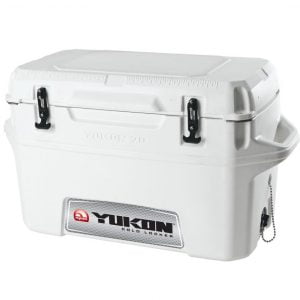 Pretty much the same thing can be said about this cooler except that if you opt for this one, we’d guess that you need more storage capacity which could be a game changer when it comes to camping or any outdoor activity.

All in all; both these coolers are extremely easy to handle and transport given their weight and external dimensions, as they’d be a great add to your car so that no scenario ever beats you. 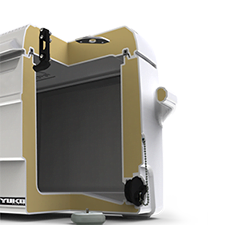 First things first; both Yukon coolers are roto-molded which only makes sense since Igloo is directing their effort towards making coolers that can easily withstand the harsh natural circumstances known to the wilderness. Thus, the Yukon coolers on this review are virtually indestructible thanks to the robust polyethylene outer-shell used to construct them which resulted in a fine finish that can be easily compared to any pioneering brand you can think of.

What’s even better is that Igloo made sure that the Yukon coolers are bear resistant which means; if a bear can’t get to your goodies, nothing really can.

Now in terms of design; the Yukon is what could be your regular, nothing out of usual cooler. It’s simple, neat and to the point with few details that are known to any good cooler. However, the top of the lid is nicely textured so that it can safely and practically be used as a chair, little table or even as a cutting board if necessary. 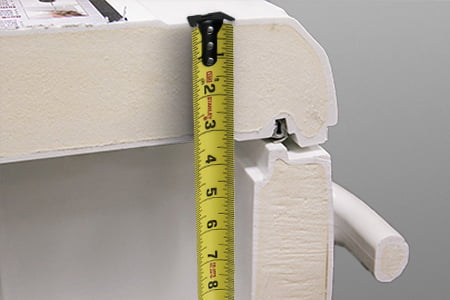 This is literally where things get serious. Igloo have come a long way making all kinds of coolers and products specifically to make outdoor time worth a while. And if you’re getting one of their Yukon coolers, you may lay rested knowing that this could go nowhere wrong.

Yukon coolers got everything that’d made a cooler a strong performer when it comes to ice retention; there is the commercial grade gasket that perfectly holds air from getting in or out of the cooler, the polyethylene plastic that works wonders in terms of insulation, and the 3 inches of polyurethane foam on the lid for a prolonged ice retention ability.

Running the usual basic tests, Igloo proved worthy of whatever you’d invest in it because it simply stroke us with an ice retention performance that went head to head with the world leading brand we all tend to compare every cooler to; Yeti.

You’ll have ice on you for a solid 5-6 days with these Igloo Yukon coolers which is more than enough for any outdoor activity that you might plan.

Given the features and everything else that we’ve mentioned earlier in this Igloo Yukon cooler review, Yukon coolers are perfect match for anyone who’s looking for a solid cooler that can beat the wilderness, bears and heat. Consequently; anyone who’s an outdoor enthusiast can go for a Yukon cooler without any second thoughts.

Also, since the insulation ability is on the high side, Igloo Yukon coolers are a great choice for camping and road trips which would make anyone want think about keeping a Yukon right in the back of their car.

Furthermore, Igloo directed this line towards the rafting community who need tough and durable coolers that can stand up to raging waters; and to be fair, both Yukons are capable of doing exactly what’s expected form them.

Last but not least, Igloo guarantees their fishermen and hunter clients to be satisfied with a Yukon cooler which proved to be easy to handle, rigid and very functional.

Igloo Yukon vs Yeti Tundra : Which Is Better?

YETI has managed to be the worldwide standard when speaking about coolers; and as unnecessary as it might seem to be, Igloo, regardless of its history, has to go through this little test where we compare both brands to see which is better. 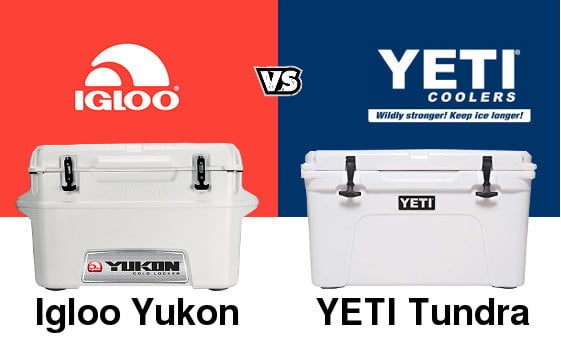 The Yeti Tundra line offers a variety of sizes including the ones that are close to Igloo Yukon’s, and let’s start our little comparison with the perpetual crisis called “price”. Yeti sells their Tundra 65 for 350 dollars, while Igloo Yukon 70 coats something around 320-330 dollars which as you can judge doesn’t leave us with a huge gap here.

However, it’s quite a well-known fact that when Yeti says a cooler can handle a certain amount of quarts according to the numbers given to each cooler, you’ll actually end up with 3 or 4 quarts less than promised. On the other hand, Igloo Yukon offer exactly 50 and 70 quarts just like the names/numbers suggest.

Also, running the regular experiments; Igloo Yukon was able to hold ice up to 5-6 days along with Yeti Tundra coolers without adding any ice and being completely exposed to the sun. It was not a surprise taking into consideration the build quality, the roto-molded design and thick walls on Yukon’s coolers.

Now in terms of looks, one has to admit that we got nothing on Yeti’s coolers; they’re sharp and neat with what could probably be the highest end production known to coolers with plenty of colors to choose from. Still, Igloo did a really good job with Yukon’s line making it super simple and practical with rigid and durable details; even the T-latches are bigger and thicker than Yeti’s.

All in all, both brands seem to have done a great job making these quality coolers which we believe makes it a little hard for anyone to choose one unless you already have you mind made by now.

It’s possible that you might have come across an Igloo cooler before and you might think that you’re familiar with what Igloo has to offer. Well; you don’t really know what’s Igloo capable of until you’ve tried one of their Yukons.

This coolers line is tough, up to date, and ready to compete with any other giant brand out there.

So, if you’re looking for a quality cooler that can do the job exactly as required with the possibility of saving couple bucks, Igloo Yukon is your guy.