Canyon is definitely not an old schooler in the realm of ice chest. However, it’s been gaining momentum surprisingly quick & that calls for a closer inspection.

Apparently, Jason was sick of buying coolers that can’t handle the aggressive environment of white water sports and that inspired him to create his own brand: Canyon.

Canyon is an all-American cooler manufacturer that was initiated 6 years ago with one purpose. Seemingly, the brand claims to be able to bring most premium coolers to their knees for a much lower cost; Being a gigantic claim, our team did not hesitate to put it to the test and this is our detailed Canyon cooler review.

In order to make an echo in such a vast industry, new manufacturers are required to provide some sort of a variety no matter how limited. However, Canyon seems to be way ahead in the variety game as it presents a wide list of options that travel between two different lines of hard-sided coolers and a few soft-sided ones. 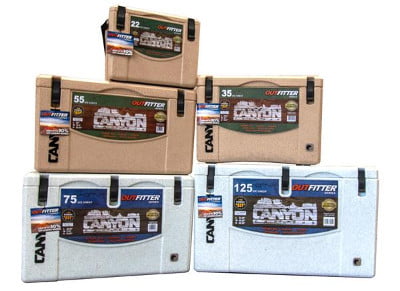 One of Canyon’s biggest accomplishments is the Outfitter line, which is rich enough to cater for pretty much anyone who needs a cooler. Indeed, this line harbors 5 different sizes, ranging between 22 Qt. all the way to 125Qt.

In-between those boundaries, the brand presents 3 versatile options that also happen to be the best sellers. However, if we had to choose one, it would be the Outfitter 35Qt.

In that respect, the 35Qt is the most versatile Canyon cooler since it could literally fit any profile. Hence, whether you’re an avid angler, a small catch hunter or a party lover then you’re definitely going to appreciate this Outfitter. Accordingly, the Canyon Outfitter 35Qt measures 23.75 x 17 x 23 inches, and handle up to 30 liters. 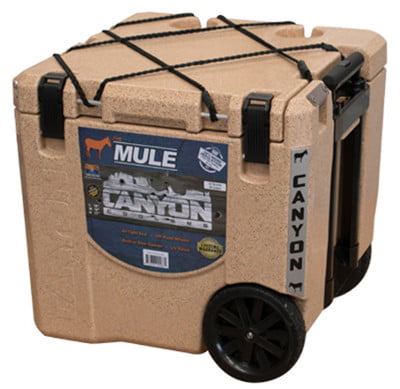 If you are interested but still reluctant because you don’t feel like carrying a box full of ice wherever you go, then you can always opt for the mule. Unapologetically, Canyon includes a cooler with wheels within its collection in order to cater for those of us who will be moving around regularly.

Consequently, the Mule 30 Adventure Canyon measures 20.5 x 20.3 x 18.3 inches, which is a shape that will be much easier to wheel around compared to a rectangular cooler. 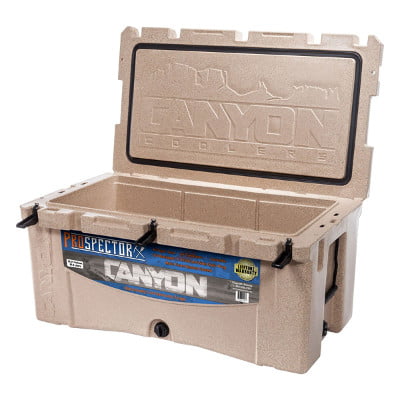 If you haven’t found your match yet then perhaps Canyon would interest you in its Prospector. The Canyon Prospector is a beast of a cooler, which is designed to endure aggressive environments and animal attacks.

Indeed, this is a 103Qt cooler and it measures 37.5 x 18.5 x 36.75 inches, limiting capacity to 97 liters. Consequently, the Prospector weighs 40 pounds when empty but that’s a price a lot of hunters are willing to pay. 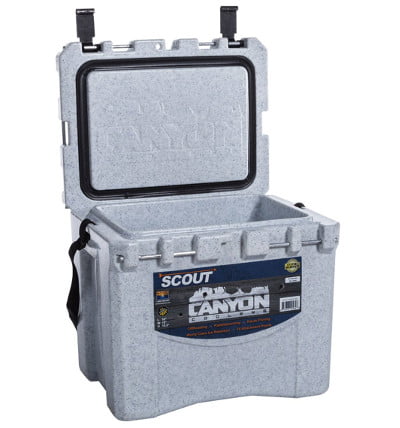 In case you thought that Canyon skipped hikers, think again. It’s actually insane to consider creating a cooler for hikers, climbers and adventure lovers who are constantly on the move but insanity is just another feature for Canyon.

Accordingly, the brand offers the Scout 22Qt which is a small, versatile and square cooler that measures 16.5 x 15 x 16 inches. This cooler is definitely not designed for long journeys but the upside is that you can carry it individually for long distances as it weighs a total of 14 pounds when empty. 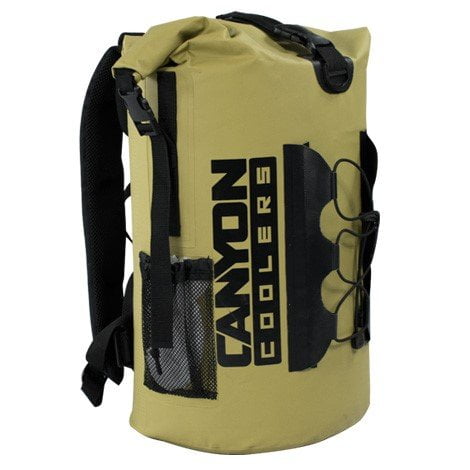 If you aren’t about that hard-sided life then you can always opt for a soft-sided Canyon for your longer journeys. In fact, soft-sided canyon cooler have been impressively popular since they come in two different sizes that you can wear as backpacks.

Canyon soft-side coolers go by the name Quest and they are available in 16Qt & 32Qt, which should satisfy most backpackers out there.

If we had to choose one word to describe Canyon hard-sided coolers, it would be ‘Boxy’. In fact, Canyon is highly aware of its design and has all the right justifications as to why they always opt for a boxy shape.

With the exception of the smallest size, the entire Outfitter line is shaped like a standard rectangle. However, the brand insists on maintaining a smooth deign with nothing sticking out which is undeniably practical.

Indeed, one thing which you will notice right away is how easy it is to pack & transport these coolers because there are no obstacles that would require constant caution.

On the other hand, the Canyon Prospect adopts a more aggressive design in order to blend in nicely with its target environment and successfully fend off predators. Thus, while slightly awkward, the Prospect looks very aggressive and that is highly dependent on build quality.

Speaking of which, all Canyon coolers benefit from the same development process that is based on a thick polyethylene crust which is then supported via an injected foam filling for serious protection.

Accordingly, the brand relies greatly on rotational molding technology to ensure that their coolers are strong enough to endure the abundance of probable situations. 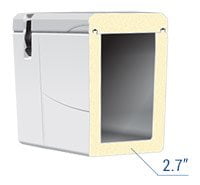 Resilience is undeniably a priority for a cooler because of the nature of the product. However, the core measurement upon which most of us make their verdict is ice retention.

There is no mystery in the fact that most of us are looking for a cooler than can maintain ice for the longest period of time but that often comes with a large tax.

We did say often & not always because of brands like Canyon. In fact, Canyon, amongst a few others, managed to bring performance to impressive levels without pumping prices beyond reason. However, that did not come easy.

Accordingly, Canyon coolers benefit from a substantially thick insulation that consists of hard polyethylene walls, coating over 2 inches of pure isolation foam. Where other brands in the same price range are satisfied with far less insulation, Canyon pushes the envelope a little further because that’s what you do when you want to leave an impression.

Not only will the foam dissolve most of the heat before reaching the core of the cooler, the rotational build of the cooler’s mold will perform the difficult task of keeping the heat out at all cost.

In other words, Canyon coolers feature a gapless mold that cradles the cooler to perfection, limiting the environment’s influence to bare minimum.

Consequently, our tests were expectedly positive as the Canyon Outfitter & Prospect pulled an impressive 5/6 days under the sun before all ice melted.

No matter how impressive a performer, an ice cooler is never complete without the right set of features.

Undeniably, based on our day to day experience, we realized that features tend to matter more the more you have to interact with the cooler. Thus, while we do not care much for features at first, you sure will regret neglecting them later on.

Accordingly, here is a quick run-down of what you should expect from Canyon coolers.

While it’s not a mystery anymore, Canyon coolers are clearly capable of catering for pretty much anyone out there. Indeed, these coolers are animal attack resistant, they are robust, UV protected, fully supported by a life time warranty and they come with an impressive insulation system that is capable of pulling a straight week of ice.

Accordingly, Canyon coolers come in a variety of lines, shapes and sizes in order to cater for all the different needs and requirement of anglers, hunters as well as the casual user. However, to help you see the brand’s true potential, let’s organize a Canyon Coolers Vs Yeti contest.

Canyon Coolers Vs. Yeti: Which Is Better?

A Canyon cooler review wouldn’t be complete without a proper stand-off. Hence , it is time we put it to the test against the big bully that goes by the name Yeti. 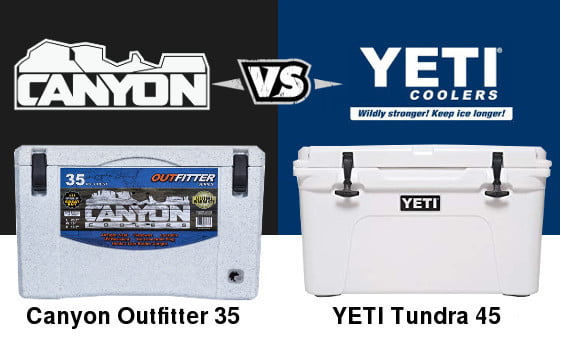 Yes, We know what you’re thinking already: Yeti doesn’t exactly produce the best coolers on the market anymore. However, one thing is for sure, Yeti is an exemplary brand that may charge a little too much but still offers quality coolers.

While it is difficult to arrange Canyon Coolers Vs Yeti comparison, Canyon has come a long way to give up and it seems that Yeti won’t be able to hold it down. Indeed, Canyon coolers are just as ‘premium’ as any Yeti out there since they are coated in the same robust polyethylene crust. However, Canyon coolers are actually thicker than Yeti in terms of insulation, which doesn’t influence performance much but still gives Canyon the resilience advantage.

Further, while the Yeti Tundra 45 can only handle 37 Qt, the Canyon Outfitter 35 can actually withhold exactly the same number in Quarts. Moreover, Canyon coolers are significantly lighter than their match on the Yeti side even though they are both roto-molded.

Before we seal this article, it is tradition around here to remind you that while our job is to guide you through this little purchase journey, it is still your duty to make that final decision.

Accordingly, Canyon coolers are definitely worth the extra buck since it is a brand that prioritizes performance & resilience over marketing and that was evident in our last comparison.

In conclusion, we hope that our Canyon cooler review helped you make up your mind on the brand or at least guide you towards a final verdict.