To be frank, we did not expect Giantex to take such a leap in the industry and fully evolve from a brand that creates portable washing machines into a resilient competitor in the ice cooler universe.

On the other hand, it seems rather reasonable to see Giantex on our priority list since it is a manufacturer that accumulated enough knowledge and experience in a similar business.

Accordingly, while it is easier to judge a cooler by customer reviews, it wouldn’t be clever to completely dismiss or embrace Giantex before you actually learn a bit more about its qualities, features, engineering and overall reliability.

So, without further ado, let us dive right in and put Giantex under the scope.

Any prominent cooler brand knows the exact value of variety. Hence, it is rather essential for an upcoming brand to display a wide-enough variety to cater for as many people as possible.

In that respect, Giantex does not pretend to be a premium brand. However, it still provides enough of a variety to satisfy a significant portion of potential customers. Indeed, the brand at hand created 4 different categories to cater for people with different needs and requirements:

The first Giantex on the list is the best-selling 20Qt, which is a clever little cooler that embodied the perfect match for the casual user.

In fact, this cooler measures 20.1″(L) x 13″(W) x 15″(H), and it can handle about 18 liters. Accordingly, this is potential the perfect Giantex cooler for picnics, road trips, beach days and your basic jobsite. 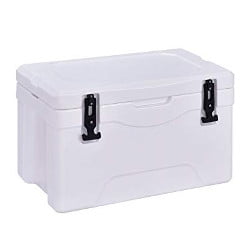 Nonetheless, the downfall of this exact size is that it is too big for the casual user and too small for anglers / hunters. Nonetheless, the 32Qt is still a solid option for those who need a capable yet compact cooler. 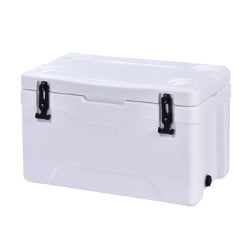 The 40Qt might just be the most appealing Giantex cooler for anglers because it is the perfect match for a small boat. Indeed, this cooler measures 23.8″(L) x 13.1″(W) x 14.8″(H) which is enough to cater for a prolonged fishing session & perhaps even cater for a BBQ party.

The cooler at hand is thus capable of handling up to 38 liters, which equates to a lot of cans, fish & a load of ice. 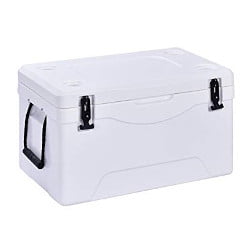 The 64Qt Giantex is a vacation’s best-friend. Indeed, this cooler is large enough to cater for a large group of people on a long trip that can extend for days. Accordingly, this cooler measures 28″(L) x 16.1″(W) x 17.1″(H), which is significantly larger than the previous model but would still fit in your car trunk easily.

The cooler at hand is also a great option for anglers who are looking for something robust and reliable as it is capable of handling up to 60 liters. 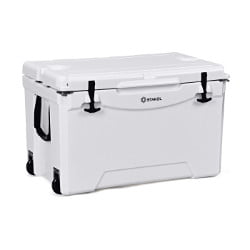 Perhaps you’re looking for something more family oriented, something to cater for the entire family on weekends, picnics & BBQ parties. If that’s the case the Giantex got exactly what you need and a little more.

Indeed, the Multi function wheeled Giantex is literally everything you need for any event because it is a wheeled cooler that transforms into a decent picnic table. Accordingly, the Rolling Giantex measures 29″(L) x 18.5″(W) x 18″(H), which is impressive compact.

There is absolutely no reason to beat around the bush; we can’t escape the fact that Giantex coolers are designed poorly. Sadly, you can tell that the brand has invested some effort to try and distinguish these coolers from the rest. However, Giantex ended up with a poor design that reflects cheap quality.

However, that’s exactly the point. Giantex is a highly affordable brand of coolers that limits expenses on flashy design in order to invests most of its efforts into pushing the performance of these coolers to the maximum.

Hence, despite the plain layout, Giantex coolers are reinforced via a resilient LLPDE polyethylene coat that is both roto-molded and UV protected. Indeed, while design suffered, quality thrives on these coolers and that’s the main reason we are reviewing this brand today.

Accordingly, by focusing on performance, Giantex managed to minimize flaws that could result from ‘adventurous designs’ to bare minimum. Thus, everything you see on these coolers is firmly reinforced from the hinges down to the latches in order to push longevity to levels that could compete with premium brands. What is actually interesting about that is the fact that Giantex does all that for a fraction of the price. 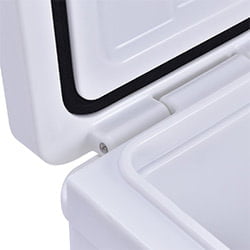 It seems that no matter what someone tells you about a cooler, all you want to know is how good the insulation is. In that respect, let’s cut right to the chase and put Giantex on a cold slate.

Giantex is a budget brand that invests in a market where high expectations aren’t really a priority. Consequently, while Giantex coolers make a perfect companion on a short trip, a weekend adventure or a short angling session, it most surely isn’t adept for professional hunters / anglers.

For starters, it is only fair to point out the fact that Giantex coolers exhibit an impressive 1.77 inches thick insulation that consists mainly of LLPDE polyethylene walls that are then injected with dense PU foam. The insulation is thus exemplary for a brand that operates within such a humble price tag. However, once you test these coolers, you begin to learn why they cost so much less than your average YETI, ORCA & ORION.

While Giantex coolers are indeed roto-molded, they can only push through the third day before ice melts completely and that is not a bad thing.

Indeed, while it might not be the best match for serious anglers / hunters who need to keep their game frosty for days, Giantex is more than enough for casual use and that’s still impressive, considering they cost a fragment of the price of a premium cooler. 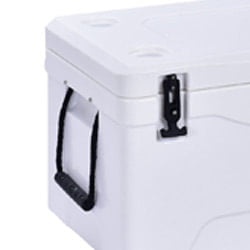 Perhaps the feature we use the most, carry handles are one part of the cooler that will shape our experience the most. Indeed, while hard handles are more reliable, Giantex chose to completely strip its 32 & 40 Qt coolers from any sort of handles except for the molded ones on the body. This stunt received a load of criticism for the brand, which is very well deserved because carrying a cooler via engraved handles can be really frustrating in the long term.

Luckily however, the 20Qt Giantex benefits from a Yeti-style central handle that makes carrying this little cooler as easy as carrying a grocery bag. On the other end of the spectrum, the 64Qt Giantex was spared from the ‘no-handle’ innovation & instead comes with reliable rope handles.

While Giantex adopts the T-shaped latches, these aren’t exactly T-latches. Indeed, the latches on Giantex coolers are rubber and they do extend to lock in place but they don’t rely on the T mechanism to lock down but rather on a hole in the latch that fits nicely around a solid lock base.

Hence, while different, Giantex latches perform impressively well as they hold the lid down tightly to prevent air from escaping or getting into the cooler.

While the lid is strangely designed with a rectangular shape in the middle that will most certainly collect water, dirt or a mix of both, Giantex was still smart enough to put 4 cup holders on top. Indeed, one of the most practical features on coolers must be cup holders because there usually aren’t any natural cup holders in the wilderness.

Further, the lid at hand is robust enough to be used as a casting platform for anglers and that is rarely the case for budget coolers because they are more exposed and usually less rigid than premium coolers.

Accordingly, this leads us to admire the fact that Giantex blessed its coolers with protected hinges for maximum durability. Thus, what once was the first thing to crack on any cooler, is virtually not a concern for Giantex coolers and that’s unusual for a budget brand. 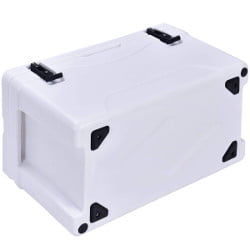 Since they are targeting anglers as well, Giantex had no choice but to introduce rubber feet on its coolers to give them more legitimacy. While it is hard to attain a week of ice retention with one of these coolers, all Giantex cooler reviews seem to be pleased with the fact that the brand thought of anglers as well.

Accordingly, these little anti-slip rubber feet will prevent the cooler from sliding around on your boat / vehicle which is a lot more dangerous than it sounds. 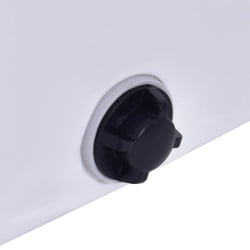 Last but definitely not least is the draining system on these coolers. Undeniably, it wasn’t easy to believe that such an affordable cooler is roto-molded but now it seems that it also comes with the features necessary for practical use. Hence, the draining system on Giantex coolers feature an easy relief plug with a convenient design that allows water to escape easily without the need to tilt the cooler.

Giantex coolers are often placed in a vaguely general category which is understandable given the fact that they are mediocre performers. However, it is important to note that Giantex coolers are actually quite the perfect match for the casual user who needs a reliable cooler that won’t cost much but will always get the job done.

Accordingly, while Giantex coolers might not be the best option for serious anglers / hunters, they are still within range if you know you only need a couple days of ice in the wilderness. Otherwise, it would be far more beneficial to opt for something like an RTIC or Grizzly.

Giantex Vs. Yeti: Which Is Better?

Through this Giantex cooler review, we have tried our best to strip Giantex down to the bone and exhibit its value, features, characteristics and performance. However, in order to get a clear idea about where Giantex ranks on the market, it is helpful to compare it to an exemplary brand. 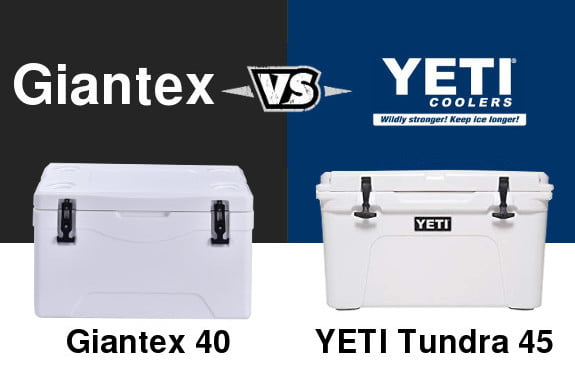 Hence, Yeti is arguably the mother of all coolers since it has been popular since forever and that makes it a decent starting point to measure the success of others. Hence, Yeti has been popularized because it creates robust, high quality performance coolers that can achieve up to 10 days of ice retention in good conditions. However, Yeti is also known for being quite pricey and that is the aspect that allowed many brands to overthrow it.

Accordingly, when compared to Yeti, Giantex seems to be inconsequential and almost stripped out of value but once you compare prices and value, you begin to realize that Giantex isn’t half as bad.

In fact, taking into consideration what you are paying for these coolers & what you are getting in return, you begin to understand that Giantex could be the best cooler for the buck.

Hence, for a resilient roto-molded cooler that comes with all features necessary and provides a decent ice retention, Giantex seems to be the perfect deal for anyone who needs a casual cooler for weekends, BBQ parties, beach days and basically all other activities that require less than 3 days of ice.

In conclusion, while it isn’t the best brand out there, Giantex is definitely a decent option that seems to be more than a quick money grab. Indeed, you are actually getting what you paid for and that is one of Giantex biggest advantages. Hence, if you are on the hunt for a cheap cooler that can get the job done then you will probably never do better than a Giantex.