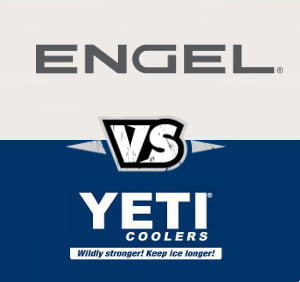 It has always been tough to compare big brands and ice coolers are no exception. Indeed, names like Engel and Yeti are pretty much the Ferrari & Lamborghini of coolers, and just like them, these coolers are both equally impressive. However, there will always be a million ways to compare the two and that is how you can conclude with a favorite.

Let us begin by acknowledging that both brands deliver top quality coolers and you would be significantly satisfied no matter who you pick. That being said, strap in and get ready for a deep dive into the beautiful details of splendid ice coolers.

Engel Vs. Yeti Coolers: An Introduction to Both Brands

It is undeniable that Yeti’s reputation proceeds it wherever it goes, being an extremely reliable brand and one with so little criticism as well. On the other hand, Engel is definitely one of the upcoming champions in the industry and that didn’t come easy.

In fact, some would argue that Engel had to work even harder to make a name for itself in the industry to be able to stand side by side with this giant called Yeti.

So, what does it take to shake the throne of a Yeti? Well, let’s find out! 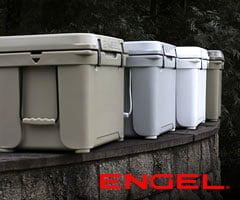 50 years ago, Engel started as a shy local brand with a lot of ambition and even more dedication. Hence, since its early beginnings, Engel’s purpose was to build a limited variety of coolers that cater for the needs and requirements of a specific audience.

Starting with anglers, the brand begun to branch out into other regions, incorporating the requested profile of hunters, campers and even the regular Joe. However, in order to appeal to all those different kinds of people, there was something the company had to establish and that’s
quality.

Quality has always been a priority for Engel and you can definitely see that in their products. Accordingly, to be able to match the quality of the big sharks, the brand had to adopt a similar approach.

In that respect, just like Yeti coolers, Engel coolers are developed through the roto-molding method, which guarantees impressive precision in the creation process. Hence, the machines involved in this process limit imperfections to the maximum and grants the coolers a much denser insulation, resulting in an impressive ice retention period.

Further, all Engel coolers benefit from an airtight seal that makes sure no air comes in or out of the cooler regardless of how shaky it can get. Nevertheless, we must admit that ice retention depends on much more than just a thick insulation and an efficient gasket.

Indeed, the nature, environment and temperature surrounding these coolers will definitely help increase or decrease the ice’s life span. So, in order to avoid burning through your ice cargo quickly, you are advised to open the cooler only when necessary or simply get a bigger cooler. 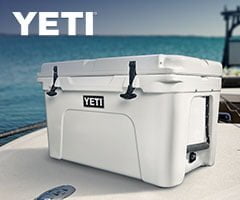 It is impossible to miss a Yeti cooler since they are literally everywhere. Indeed, this brand managed to gain the trust of many professionals and perhaps it can get you on board as well.

To lure people in, Yeti relies on a simple principle, which is known as quality beats price. Hence, while Yeti coolers are relatively more expensive than their competition, they still deliver high value to match that price margin.

The difference between Yeti and other brands is that these guys didn’t start making coolers on a whim but rather to fulfill a certain need that the market had.

Accordingly, the Seider brothers decided to bring us a reliable series of coolers that can level with the needs of anglers, hunters and even occasional users.

In order to attain every category, Yeti coolers depend on a rotational molding with thick permafrost insulation to reach relatively up to two weeks of ice retention.

In that respect, the Tundra series is a great example of what Yeti coolers are capable of. Accordingly, this line can go from a 20 to a 220 can cooler, covering anyone from the daily commuters who need their drink to remain fresh up to big catch hunters.

Yeti Vs. Engel – Which One to Choose

In order to keep it short and to the point, we will go right ahead, and do a quick comparison between the main features of the two brands and hopefully help you determine which one fits your profile better.

Being under the scope of many competitors, Yeti pushed most of its efforts into insulation, which is why they are able of achieving 5 to 14 days of ice retention, depending on the size of the cooler and the environment. However, in order to get there the brand had to sacrifice some of its volume in return for thicker insulation.

Accordingly, a standard Yeti cooler comes with a 2 inches thick insulation all around and 3 inches on the lid. Not to mention that every Yeti comes with 5 years warranty and that is something you cannot put a price tag on.

On the other end of the line, Engel is definitely not very far as it also promises up to 10 days of ice retention thanks to its 2 inches thick insulation and tight seal gasket. However, smaller coolers are most likely not going to get close to that 10 days mark which is reasonable.

On the bright side, this is one of the few brands that offers dry ice compatibility and that’s in itself a sufficient lifetime warranty.

Surprisingly enough, Engel is one of the few brands that can actually compete in variety with a pioneer like Yeti and so it comes in all the following sizes:

Being the giant that it is, Yeti doesn’t come short when it comes to sizes and they list as follows:

To conclude our little Engel Vs. Yeti battle, it would be safe to objectively argue that neither of the two brands comes out on top because to each their own.

When comparing Engel vs. Yeti coolers side-by-side, there are a lot of similarities, like solid build quality, performance, and design, but there’s a lot of differences too — some subtle, others, not so much.

Both brands are comparable in terms of their offerings. The pricing on these are also within a couple of bucks. So, then, Which cooler brand should you choose? Which manufacturer is best?

I’m sorry to disappoint you, but the truth is that there is no right or wrong answer. Both Engel and Yeti provide solid coolers of different types.

So, if you don’t mind spending that much more for a quality cooler that will never fail you then by all means go for a Yeti, but if you are not easily influenced then you can go ahead and get your hands on an Engel because you will be getting similar quality for much less money.

That being said, we hope this article helped you make up your mind or at least gave you some clarity to dig deeper in the right direction.